🏆 Nomination: Best Of 2022
RISE UP RESIDENCY is a week-long mural project and educational programme taking place in September 2022 in Margate, Kent. The initiative is spearheaded by RISE UP. CLEAN UP. and Margate-based, internationally acclaimed artist Louis Masai.
The residency welcomes seventeen local and international artists to stay in Margate and create public art as a means of raising awareness of ocean conservation and the issues caused by plastic in and near our oceans. From documenting ocean biodiversity to plastic hazards and ocean species, the murals will remain in the town and intend to act as an educational backdrop. Their aim is to inspire, unite and empower the community of Margate and its visitors to partake in reducing plastics and respecting the ocean.
The residency intends to support and directly engage with the community of Margate through a series of talks and workshops from local businesses and direct employment of locals to work on the programme.
Within an ocean forest of local kelps and seaweeds (also known as blue carbon) is a floating plastic bottle. Inside the bottle is a trapped local spotted catshark, shocking reports have averaged 2-3 sharks killed every second. Being a local shark highlights that UK oceans are also a part of those statistics. Our partners Sea Shepherd’s sole mission is to protect and conserve the world’s oceans and marine wildlife. They work to defend all marine wildlife, from whales and dolphins to sharks and rays, to fish and krill, without exception.
Growing off the plastic bottle is more seaweeds, highlighting the length of time the plastic bottle has already been in the water. In 2022 Our partners Everyday Plastic teamed up with Greenpeace to create the UK’s biggest nationwide investigation into household plastic waste. Almost 250,000 people from nearly 100,000 households took part in The Big Plastic Count and over one week they threw away just under 6.5 million pieces of plastic packaging waste.
During the production of this mural Moon Bottles provided us with refill bottles so we didn’t contribute to Thanet’s plastic problem. Alongside our partners City To Sea we are also campaigning a Thanet wide water bottle refill scheme to reduce the amount of plastics leaving our homes and entering the oceans. 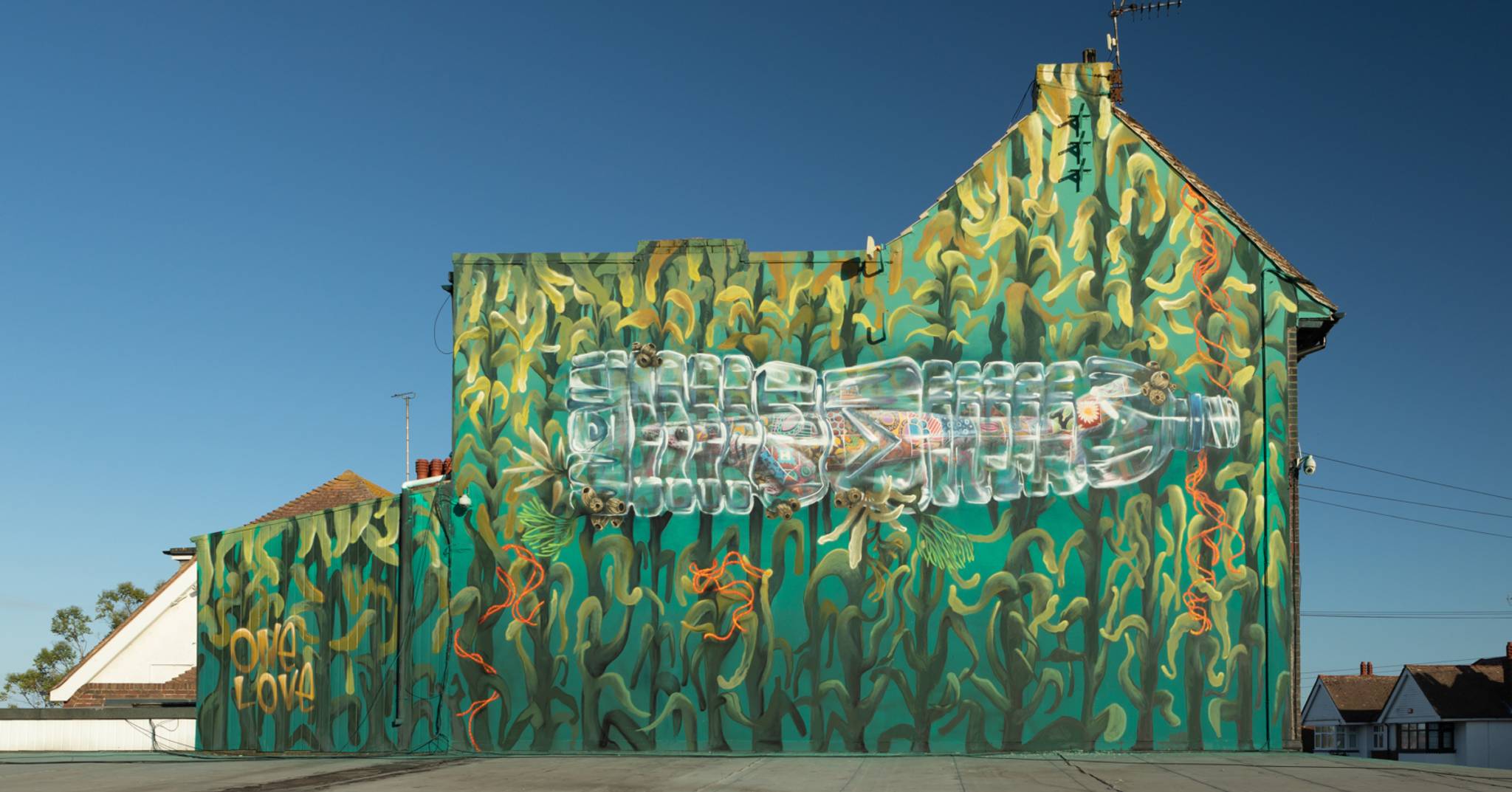 Hunted by Tim. Pictures by provided by the artist.